Wrong bandage tied on Bajrang’s head, did not win gold because of the doctor, big disclosure 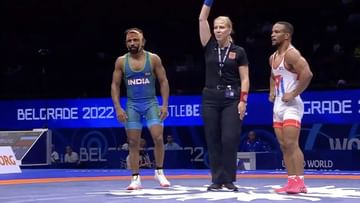 India’s star wrestler Bajrang Punia was injured in the World Championship, due to which he lost his chance to win gold.

Bajrang Punia won the bronze medal in the world championship

India’s star wrestler Bajrang Punia, who won the bronze despite an injury in the World Championship, is angry with the organisers. Bajrang has alleged that the doctor present at the World Championships used a hard tap on his injury so that he could not give full attention to the match. Olympic medalist Bajrang Punia suffered a head injury during his quarter-final match against John Michael Diakomihalis of America. A lot of blood was coming out of his head, after which Bajrang was given first aid after stopping the match.

Bajrang says that the doctors put tape on his head to stabilize the knee and heel. Due to this, Bajrang suffered a lot. The tape got stuck in his hair. Bajrang won the quarter-final match but he did not get time to prepare for the next match. Bajrang said in the interview, God knows why did he do this? I had a lot of trouble with this because the hair on my head was stuck in the tape. He pasted the tape on the injury without applying cotton. I also had to cut my hair at one point to get the tape off my head. More than 20 minutes to remove it.’ He said, instead of strategizing against American wrestlers, my team and I were busy getting rid of the tape. I had 20-25 minutes between the two bouts and all that time was spent removing the tapes.

His personal physio Dr. Anand Dubey told Bajrang that ideally the doctors should have used a light adhesive tape. He said, the hard tape causes swelling in the head. This also causes pain in the head of the person. You know how wrestlers put their hands on the opponent’s head. So we decided to remove it and applied a light adhesive tape. Bajrang was out of the race for the gold medal after losing to the American player by technical superiority.

Bajrang Punia BWF World Championship
Previous ArticleHealth Tips: If you are troubled by mouth ulcers, then follow these effective remedies of grandmother
Next Article Review: The story of the film ‘Dhokha: Round the Corner’ is fine, Madhavan did the best acting

Rohit Sena will not rest, will fly the World Cup directly, know when will the team do it?

BCCI will send Jasprit Bumrah to Australia, will it be okay to stay with Team India?

Wasim Jaffer on Bumrah: No bowler will be able to make up for the lack of Bumrah, former batsman’s big statement

People suffering from body dysmorphic disorder, know what is this disease