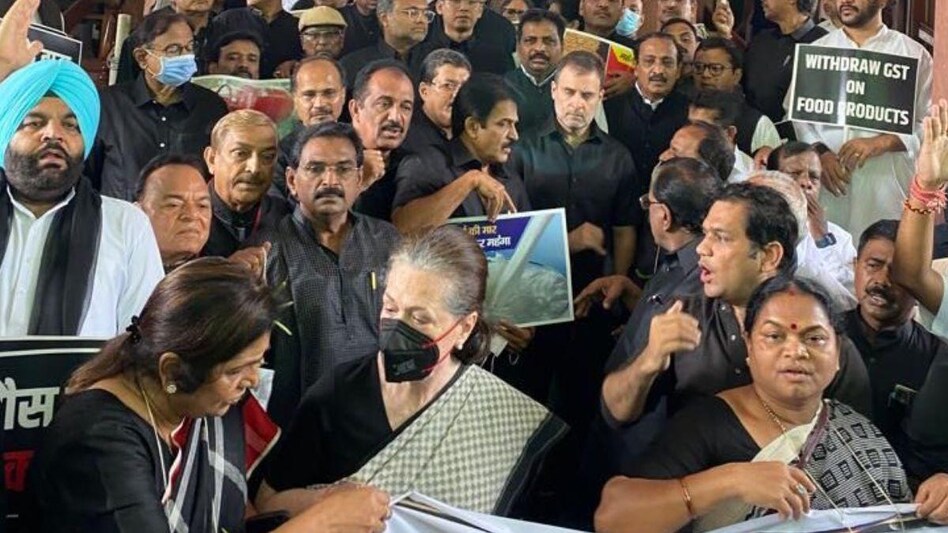 Congress is protesting from road to Parliament on Friday against inflation, GST, and policies of the central government. In a while, Rahul-Priyanka will gherao the PM’s residence. Priyanka has also reached the Congress headquarters. On the other hand, heavy security arrangements have been made on Akbar Road in view of the protest. Police has deployed soldiers in three layers. No worker is being allowed inside. Meanwhile, all Congress MPs including Sonia, Rahul arrived in the House wearing black clothes and raised slogans to protest against the Centre.

Earlier in the morning, Rahul Gandhi held a press conference. He said, ‘Are you enjoying dictatorship, democracy is being murdered here everyday. This government ruined democracy in 8 years. In fact, the Congress is protesting against the central government across the country today. While talking to the media, he wore a black bandage on his arm.

Big things of Rahul’s press conference
1. RSS man in every institute: The opposition of the country’s media, electoral system stands on their own, but in every institute in the country, a man of RSS is sitting. He is under the control of the government. When we had the government, infrastructure was neutral. We didn’t interfere in that. Today it is with the government. If someone protests, then central investigative agencies are put against him.
2. Democracy ruined in eight years: How do you feel about the death of democracy? The democracy which was built in 70 years was destroyed in eight years.
3. The more truth I speak, the more attack: My problem is that I will speak the truth, I will work to raise the issue of inflation, unemployment. He who is afraid, he threatens. Those who are afraid of the condition of the country today, what they did not fulfill, are afraid of inflation and unemployment. They are afraid of the power of the people, because they lie for 24 hours.

Updates related to the performance of Congress
In view of the protest, section 144 was imposed in entire Delhi except Jantar Mantar area. Delhi Police said that this decision has been taken in view of law and order.
Congress General Secretary Jairam Ramesh said that the government wants to stop us from protesting against inflation, so it is constantly harassing the Congress leaders.
Rajasthan Chief Minister Ashok Gehlot said that what Rahulji said, you should understand what is the situation in the country. No one would have thought that the people in the country would have to see the end of democracy. There is terror of ED, Income Tax, CBI in the country.
Congress workers across the country including Delhi, Patna, Mumbai, Bhopal demonstrated against inflation.

According to sources, the Congress has prepared a strategy for the performance at two levels. All party MPs will march to Rashtrapati Bhavan via Vijay Chowk. At the same time, party leaders and workers will go from the Congress headquarters to the PM House. Here they will gherao the PM House.

Previous ArticleTop 5 Hot Web Series: If you want hot entertainment on weekend then watch this web series on Ullu App
Next Article DDA News: Now the poor will also be able to buy their house in Delhi, DDA made a big change in the rules