Once again, Rakesh Tikait, the national spokesperson of BKYU, was seen in his old style. 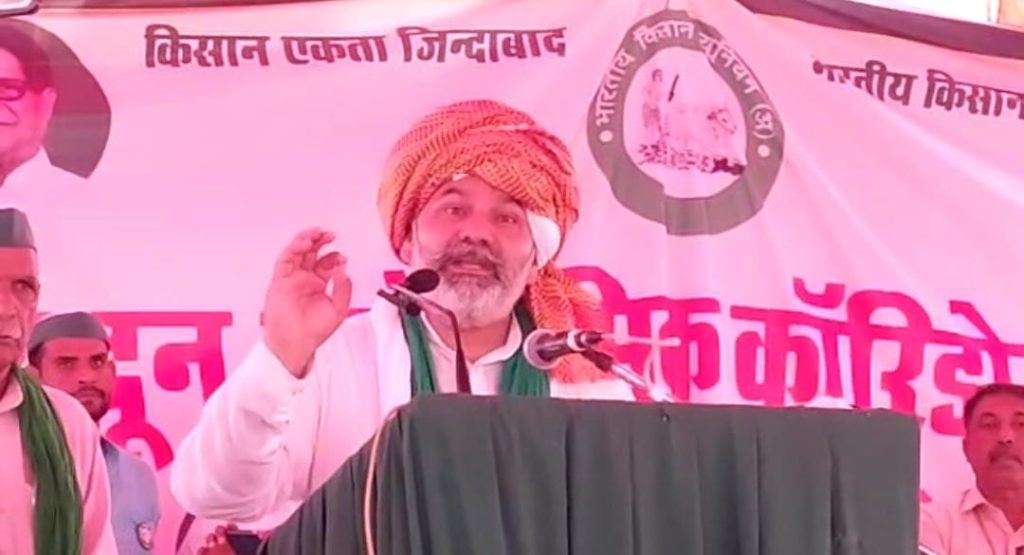 Government should stop dictatorship and divisiveness otherwise there will be big agitation: Rakesh Tikait

Baghpat. The national spokesperson of BKU, Rakesh Tikait, once again appeared in his old style, the farmer leader, who came to support the ongoing dharna on the Tikri-Sujati road, once again made harsh comments on the government and also warned of another big movement soon, Tikaits were also seen appealing to the farmers to stay away from the RSS shakhas.
Actually, let us tell you that in the Mahapanchayat organized on the Tikri-Sujati road for the Delhi-Dehradun Economic Corridor land acquisition compensation for the farmers, the National Spokesperson of BKU, Rakesh Tikait, targeted the central government, saying that the government should stop dictatorship and divisiveness, otherwise There will be a big movement in the country. Get ready for the farmer movement and strengthen the tractor.
Rakesh Tikait, the national spokesperson of BKU, who reached the Mahapanchayat, said that once again there is going to be a big movement in the country, so farmers should strengthen their tractors and install the tricolor. An agitation will be started against Agneepath scheme from 7th August. The recruited youth should stay away from the movement because even if they come in the photo, the dictatorial government will throw them out of the recruitment.
Recalling the agricultural movement, he said that the government has not spoken to any organization since January 22, 2021 because now the work of the government has become dictatorship. The government should stop, otherwise there will be agitation. RSS is setting up shakhas in every village, it would be better if you keep your children away from them. Appealing to the farmers to show the land to their children, join the movement so that the organization can be strengthened.
Rakesh Tikait said that the officials should rectify the shortcomings in the construction of Delhi-Dehradun Economic Corridor in time. Make changes to the maps and work on fixing them. Told the farmers that when the officials come to get the soil for the construction of the corridor, only then the real pressure will be put on the officials. The rights of farmers will not be allowed to die. The government should not do the work of excess.
Targeting the central government, he said that the Red Fort does not belong to anyone’s uncle. During the agitation, the police took the farmers to the Red Fort by fraud while the farmers had to go to the Parliament House. The farmers did not remove the flag on the Red Fort. The government is working to mortgage the country. The government is bringing policy on milk. Like village-village cold drinks, foreign milk will also be sold in bottles and animals will also be taxed. He asked the government to connect the farmers with Digital India so that sugarcane payment could be received on time.

Delhi MCD Election 2022: After voting, CM Kejriwal appeals to the public, said- ‘Vote for Sharif, not the corrupt’