National Herald Case: We are not afraid of Prime Minister Narendra Modi, do whatever we have to do… Rahul’s sharp attack 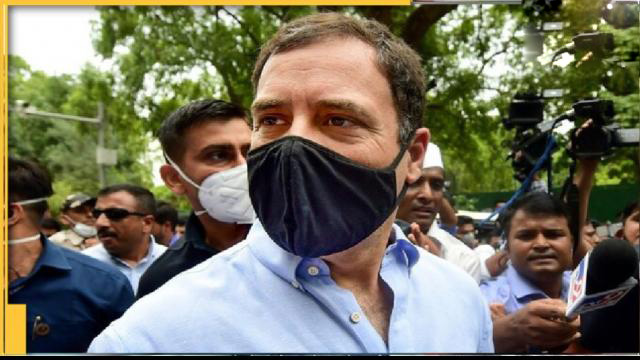 Congress leader Rahul Gandhi has given his strong reaction after the office of Young India was sealed during the ongoing ED investigation in the National Herald case. Rahul said- We are not afraid of Prime Minister Narendra Modi. Do whatever they want to do. Our job is to fight to protect the Constitution. Fight for the honor of the country. This battle will continue. Rahul said – now there will be no satyagraha, now there will be a battle.

On Rahul’s statement, BJP spokesperson Sambit Patra said- The law of the country is one for all. He can neither change for the Congress President nor for the former President of the Congress. They want to conflict with the law of India. They will neither be allowed to fight against the law nor will they be allowed to run (run away).

In the National Herald case, the Enforcement Directorate (ED) on Wednesday sealed the office of the Young India Company located in the Herald Building in Delhi. The investigation agency took this action in the money laundering case. Congress leader Rahul Gandhi left his Karnataka tour and returned to Delhi after the office of Young India Private Limited was sealed.

#WATCH He is trying to scare us. They think that by putting a little pressure on us, they will silence us but we are not going to be silent. What PM Narendra Modi ji and Amit Shah are doing is against democracy, we will stand against it: Congress MP Rahul Gandhi pic.twitter.com/l2PbYC8fli

On Tuesday itself, the ED team raided 16 locations of National Herald including Delhi, Mumbai and Kolkata from morning till late evening. This action was taken after questioning Sonia and Rahul.

Know what is the National Herald case?
The National Herald case was first raised by BJP leader Subramanian Swamy in 2012. In August 2014, the ED took suo motu cognizance of the case and filed a money laundering case. Sonia Gandhi, Rahul Gandhi and Congress’s Motilal Vora, Oscar Fernandez, Sam Pitroda and Suman Dubey were made accused in the case.

Previous ArticleDoes China want to take over the world through this micro-chip? After all, why does China need Taiwan?
Next Article Uttar Pradesh News: 12 jihadis associated with terrorist organization Islam arrested, bulldozers run on madrassa

Ruckus in Rajasthan: Sachin Pilot is in front of the magician of politics, know now what will be Gehlot’s next bet?

Political Crisis: Why is a new Chief Minister being made in Rajasthan? read what happened so far

Mission 2024: Sonia met Lalu-Nitish in Delhi, know what was the plan to stop PM Modi

Political earthquake once again in Rajasthan Congress: Observers can talk to the pro-Gehlot MLAs again today

Janhvi Kapoor is very beautiful even without makeup, fans are struck by simplicity