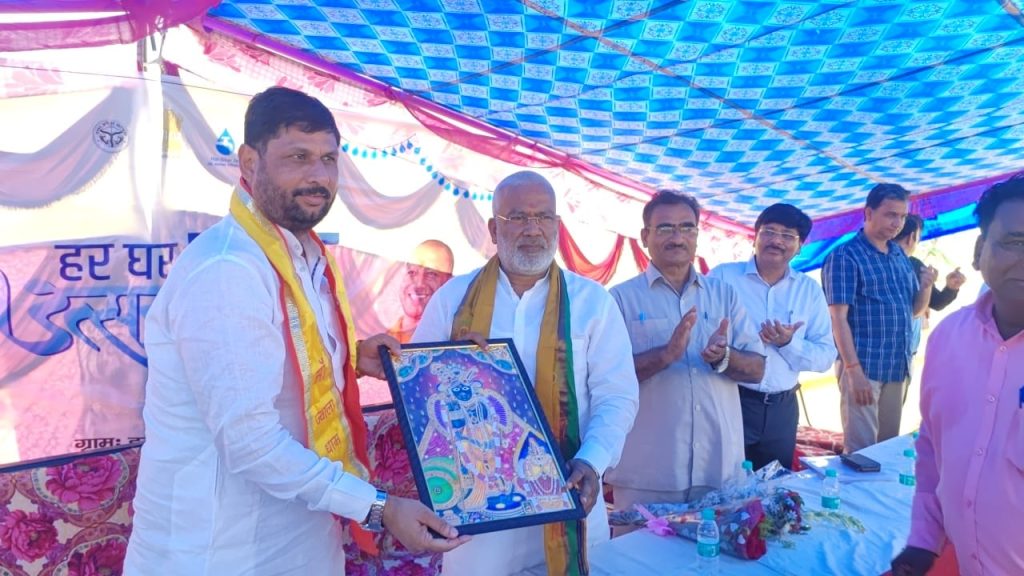 Mathura / Naujheel. The Jal Shakti Minister of the state arrived to participate in the Jal Utsav program under the Irauli Junnadar Jal Jeevan Mission, the Gram Panchayat of Mant, and inaugurated the water tank constructed by the Jal Nigam constructed at a cost of Rs 138 lakh. While addressing the public meeting, he said that every household in all the villages of Mathura district will reach the tap. The same Jal Shakti Minister and regional MLA did tree plantation.
On Friday, Jal Shakti Swatantra Dev Singh reached the Jal Utsav program under the Jal Jeevan Mission in Irauli Junnadar, the village panchayat of Mant, and inaugurated the water tank made by the Jal Nigam at a cost of Rs 138 lakh. . Addressing the public meeting, Jal Shakti Minister Swatantra Dev Singh said that water will be arranged in the houses of all the villages of Mathura district under the Har Ghar Jal Yojna. Couldn’t happen. Regional MLA Rajesh Choudhary honored Jal Shakti Minister Swatantra Dev Singh by presenting him a memento and said that arrangements would be made to have drinking water in every village of Mant Vidhan Sabha and Ganga of development would flow in Mant area. The program was conducted by Mukesh Varshney, the village head of Irauli Junnadar, Rekha Upadhyay, complained to the Jal Shakti Minister regarding the cleanliness of the drain and apprised the villagers about the problems. On this occasion Chief Engineer RK Sharma, Executive Engineer Pradeep Khandelwal, SDM Mont Indra Nandan Singh, Sunil Kumar, Dr. Rampratap Singh, JE Ansh Salaam, Vikram Chaudhary, Dinesh Acharya, ADO Ramkumar Sharma, Chandrapal Yadav, Shashank Mishra, Rajni Pandey etc. were present. are.

Previous ArticleBhojpuri Hot Video: Pawan Singh and Anjali Raj make a splash in this song, fans go crazy
Next Article CWG 2022: Arshad Nadeem of Pakistan saddened by Neeraj Chopra’s absence, said- ‘Neeraj is my brother, he is missing him’

Imran Khan said in praise of Modi – he has no property outside the country, but our PM has…

Bhuvneshwar Kumar Wife Nupur: His wife came out in support of Bhuvneshwar, Nupur gave a befitting reply to the critics