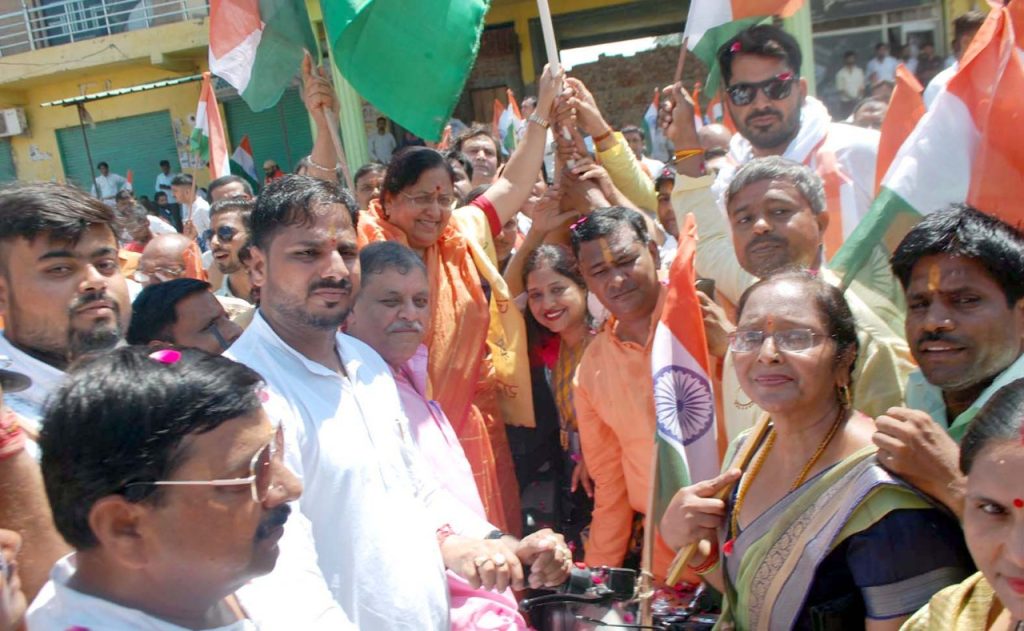 Congress has no work, so they are protesting – Baby Rani Maurya

Firozabad. Under the Amrit Mahotsav program of the BJP, a tricolor bike tour was taken out by the district and Yuva Morcha Metropolitan from Jalesar Road Dixit Market. Which was inaugurated by BJP’s Agra MLA and Women Welfare, Child Development and Nutrition Minister Babyrani Maurya by unfurling the tricolor. He attacked the Congress fiercely and also spoke about the plans of the government.
Inaugurating the Tiranga Yatra from Dixit Market on Jalesar Road, Cabinet Minister Babyrani Maurya said that this time BJP is celebrating Independence Day as Amrit Mahotsav. We salute those martyrs. Those who have sacrificed their lives for this country. The pride of the country remains intact, so this time the Amrit Mahotsav is being celebrated in a grand manner. We are doing the work of installing the tricolor from house to house. On the question of inflation of Congress, he said that he has no work. That’s why they are protesting. Counting the achievements of the BJP government, he said that various schemes are being run in the country and the state. People are getting the benefits of these schemes. Tiranga Yatra started from Firozabad Club Jalesar Road. Which left for Shikohabad via Subhash Tiraha, Municipal Corporation, Gandhi Park Square, Cinema Square, Ghantaghar, Nalband Square, Rasulpur, Makhanpur. where it will end.
BJP Metropolitan District President Rakesh Shankhwar said that this yatra is dedicated to all those brave soldiers of the country. Those who sacrificed their lives in the freedom of the country and liberated this country. BJYM Metropolitan District President Ankit Tiwari said that the purpose of taking out this tricolor yatra is to spread the feeling of patriotism to all the people. BJP District Coordinator Vrindavan Lal Gupta, Mayor Nutan Rathore, Nanak Chand Agarwal, Sunil Tandon, Dr. SP Lahiri, Deputy Chairman Yogesh Shankhwar, Amit Gupta, Akash Sharma, Himanshu Sharma, Desh Deepak Raja, Deepak Gupta Kalu, Ajit Agarwal, Shalu, Anand, Munni Devi, Anupam Sharma, Ramladheti Lucky, Rajesh, Vikas, Mayank, Abhishek, Rahul, Akash, Bunty, Sunny, Utkarsh, Hemant, Aman, Rohit, Sanket, Dhruva, Dharmendra, Yatendra etc. Apart from municipal councilors Gendalal Rathore, Ashish Yadav, Pramod Rajouria, Vijay Sharma, Mohit Agarwal, Poonam Sharma, Hari Om Verma etc. were present.

Pension complaints will now be resolved sitting at home, pensioners will get great relief