Bill should be brought in Lok Sabha and Rajya Sabha to make India a Hindu Rashtra: Manoj Shrivastava 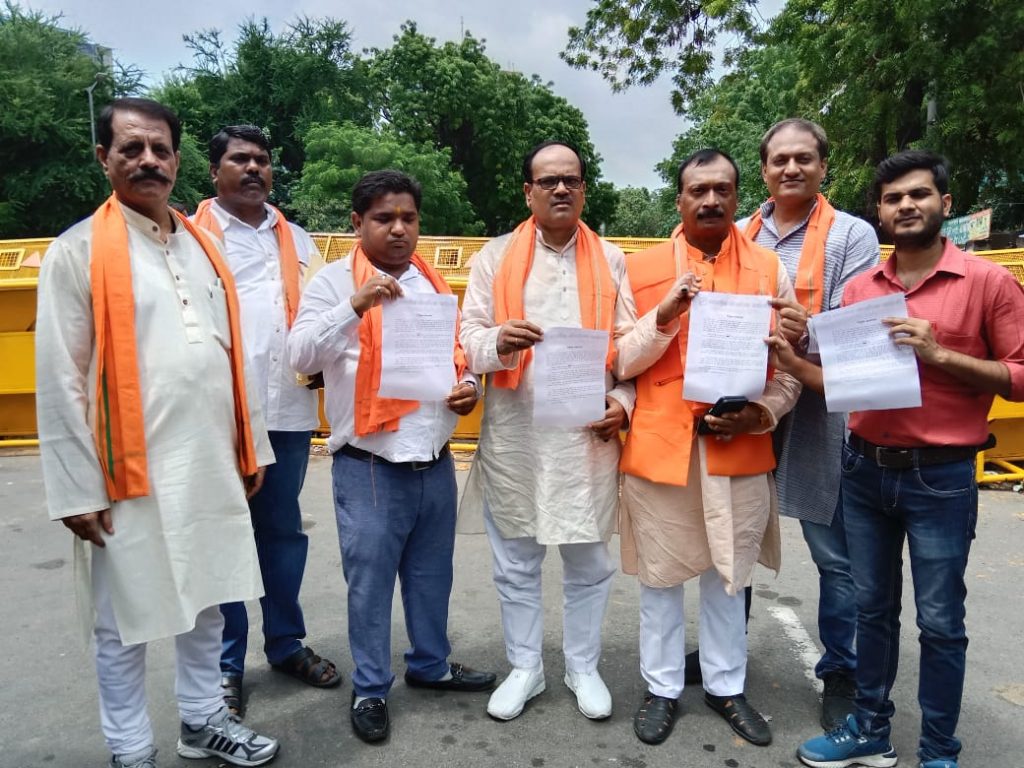 Bhaskar Bureau
New Delhi. National President of Indian Kesaria Vahini Manoj Shrivastava, National Vice President Prempal Singh Tomar, National Chief General Secretary Hriday Kumar, National Organization Minister Ajay Kumar Bajpai, National General Secretary Vaibhav Raj, National General Secretary at Jantar Mantar on Tuesday demanding to make India a Hindu nation. Under the leadership of Suresh Pratap Singh, Ajit Kumar, a demand letter was sent to President Draupadi Murmu, Prime Minister Narendra Modi, Union Home Minister Amit Shah and Union Defense Minister Rajnath Singh. While talking to the media, the National President of Vahini, Manoj Shrivastava said that we have given a memorandum demanding to make India a Hindu Rashtra. Our organization has been demanding for a long time to make India a Hindu nation, he said that India and Pakistan were divided on religious lines, after partition Pakistan became an Islamic country, while India was made a secular country under a conspiracy. They say that after a few decades, if this country becomes an Islamic country, it is better to declare this country as a Hindu nation. He said that people of a particular religion are working on a campaign to increase their population in India. While the Hindu is limiting its numbers. Because of which after a few decades Hindus will come in the category of minority and minorities will become majority. He said that Hindus should leave the caste system and work only for the upliftment and development of Hindus. Srivastava said that people of a particular religion are dreaming of Ghazwa-e-Hind, but thousands of officials and lakhs of workers of Bharatiya Kesaria Vahini will not let their dream come true. He said that this country belongs to Hindus only, Muslims have already taken their country in the form of Pakistan. So now there is no question of partition of this country. Srivastava said that every Muslim living in India is a converted Muslim. If he goes back three to four books and gets information about the names of his ancestors, then his name will also be Hindu, so Muslims should return home to their old religion Sanatan Dharma. Vahini’s national vice president Prempal Singh Tomar said that till India is declared a Hindu Rashtra, this demand will continue and Bharatiya Kesaria Vahini will work to bring out the Hindu masses from the conscious, strong and secular ideology.

Previous ArticleLiger Promotion: Vijay and Ananya were spotted taking selfies with fans at the airport
Next Article Bihar politics: Chirag Paswan, furious after Nitish Kumar’s resignation as Chief Minister, said, ‘If he has the courage, then elect him…’

For the MCD elections, the enthusiasm shown by the elders in the rural areas, many booths remained empty

MCD Result: AAP claims – we are winning more than 220 seats, BJP said – will return for the fourth time