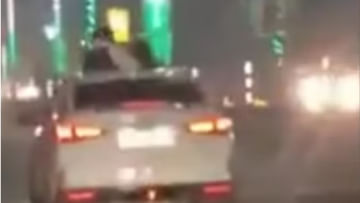 City of Tehzeeb Lucknow In the coming days, lovers are seen openly crossing the limits of obscenity. After the video of the couple flirting on the scooty, now the couple is romancing by opening the sunroof of the car video viral Happening. In the viral video, the loving couple is seen flirting in the open by coming out halfway from the sunroof of the speeding car. This video has been made by a young man sitting in another car running behind the car. This video became increasingly viral on Monday. After which the police came into action.

It is being told that this video is from Lohia Path in Lucknow. In the video, the couple is seen doing objectionable acts by opening the roof of the car. In the case, Inspector Gautampalli Sudhir Awasthi told that a video has gone viral. In which it is being said that by opening the sunroof of the car, the youth and the girl are spreading obscenity. Efforts are being made to trace the car owner with the help of CCTV cameras.

A couple has been caught on camera romancing by opening the sunroof in a moving car near the CM’s residence in Lucknow. Just a few days back, a video of them romancing on a bike surfaced. pic.twitter.com/SHkFnsCwwl

Action will be taken against the couple

Actually this video has not been made clearly. Due to the high speed of the car, the focus of the camera on the couple could not be done properly. Because of which the video is blurry. Nothing is visible clearly in the video. According to the police, it is not yet clear whether the young men and women were doing obscenity or not, but on the basis of the number of the vehicle, information is being collected about both. On the other hand, if such a thing comes out in the investigation, then appropriate action will be taken against the couple.

On the other hand, on Tuesday, a video of a couple riding a scooty was revealed in Hazratganj area, in which a couple was sitting on a scooty. The girl was sitting on the lap of the boy facing back. After the video went viral, in this case, the police had registered a traffic violation case against the young man for spreading obscenity and not wearing a helmet.

Lucknow lucknow news lucknow viral video Uttar Pradesh
Previous ArticleNever even seen a real gun, but 26-year-old Tso confronted the man who killed 10 people
Next Article Brown Rice Benefits: Brown rice is a treasure of health, to get a curvy figure, know the delicious and quick recipe of brown rice