The accused will face to face with Ankita’s friend, the police will recreate the crime scene 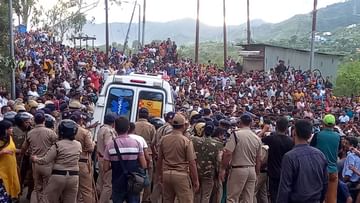 The Kotdwar court had sent the three accused, including Pulkit Arya, to three-day police custody. To interrogate the accused, the SIT team has prepared a long list of questions.

Three accused in Ankita murder case Police remand taken on. According to sources, the police Ankita’s friends Will face to face. It is said that the girl’s friend is the person who accused Spoke to me for the last time. At the same time, they will also be taken to the occasion-e-incident and the crime scene will be recreated. In this case, the Kotdwar court had sent the three accused, including Pulkit Arya, to police custody for three days on Friday. It is said that the SIT team has prepared a long list of questions to interrogate the accused.

Earlier, in the interrogation of the police, the accused Pulkit had admitted that he had pushed Ankita into the canal, after which she died. The whole matter is related to Ganga Bhogpur under Yamkeshwar block. Here the resort of the BJP leader of Haridwar was built. In this resort itself, Ankita used to work as a receptionist. Ankita’s father had raised suspicion of kidnapping on Pulkit Arya, the son of the resort owner. He had told that the daughter went to work on September 18, but did not return.

Demand for strict punishment for the culprits

CM Pushkar Singh Dhami has instructed the police officers to take strict action. He has said that the guilty will not be spared. Earlier in Rishikesh, angry people set the resort on fire. People have demanded hanging for the culprits. Let us tell you that Ankita’s body was recovered from the Chilla canal in Rishikesh. At the same time, opposition parties have raised questions on the BJP government over the incident. After this, the Social Welfare Section of Uttarakhand has removed Pulkit’s elder brother Ankit from the post of Vice President in the Backward Classes Commission. BJP has also removed father Vinod Arya from the party.

At the same time, women had protested by taking to the road regarding this incident. Pulkit Arya was beaten up by the women by stopping the police vehicle. CM Dhami had formed an SIT regarding this and asked to investigate the incident. Earlier, the ASP had told that the accused initially tried to mislead the police. But after rigorous interrogation, all the accused have confessed to the crime.