Screamed at the air hostess… now the police sent her behind bars, commotion in the SpiceJet flight 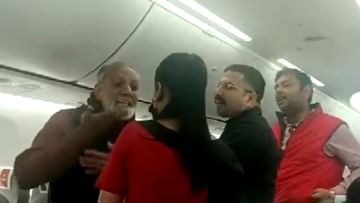 After the whole controversy, a senior DGCA official said that he is looking into the matter and will take appropriate action. A video of the incident is becoming increasingly viral on social media.

Cases of misbehavior and ruckus on the part of passengers are increasing in flights. First Air India and now spicejet A passenger misbehaved with the air hostess. SpiceJet on Monday offloaded this passenger going to Hyderabad from the plane at Delhi airport after creating a ruckus. now to the person Delhi Police Arrested and sent behind bars. Police said that a case has been registered against the passenger under section 354A.

The passenger has been identified as Absar Alam after receiving a complaint regarding the matter from the SpiceJet security officer. The incident took place in SpiceJet flight SG-8133 traveling from Delhi to Hyderabad. In a statement, the airline SpiceJet said, a passenger on board the flight in Delhi behaved unruly and inappropriately. The passenger harassed the crew members and obstructed their work.

In the video, a man was seen shouting at the cabin crew.

A video of the incident is becoming increasingly viral on social media. In the video, the passenger can be seen shouting at the cabin crew.

The passenger and & a co-passenger were deboarded and handed over to the security team at the airport pic.twitter.com/H090cPKjWV

DDCA will take action against the passenger

The crew informed the PIC (Pilot in Command) and security staff about the incident, the statement said. The said passenger and a co-passenger traveling with him were offloaded and handed over to the security team. A senior official of the Directorate General of Civil Aviation (DGCA) said that it is looking into the matter and will take appropriate action.

Delhi Police DGCA Spicejet SpiceJet flight
Previous ArticlePM Modi will meet the winners of the event that started the National Child Award
Next Article Sushmita Sen bought this black beauty of Mercedes Benz, this SUV has more than a dozen features