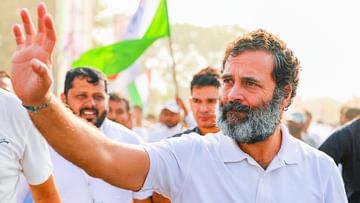 Priyanka Gandhi Vadra, general secretary in-charge of matters related to Uttar Pradesh, will also participate in the padyatra for the first time along with her entire family. During Rahul Gandhi’s Bharat Jodo Yatra, the Thakur family will present him a photo and album preserving the memories of three generations.

Bharat Jodo Yatra led by former Congress President Rahul Gandhi from Burhanpur district Madhya Pradesh Will enter on Wednesday morning. The Congress has made massive preparations for this yatra passing through the state a year before the next assembly elections. At the same time, Congress state unit chief Kamal Nath said on Tuesday that Priyanka Gandhi Vadra, general secretary in-charge of the party’s affairs related to Uttar Pradesh, along with her entire family, will also participate in the padayatra for the first time. He told that Vadra will join the yatra on 24 and 25 November on the way from Burhanpur to Indore.

The special thing is that Rahul Gandhi is the fourth person from the Gandhi and Nehru family, who is coming to Burhanpur. 41 years ago in 1980, India’s first woman Prime Minister Late Indira Gandhi came to the district. He addressed the election meeting in village Bodarli at around 2 pm in the light of torch. She had reached here to campaign in support of late Thakur Shivkumar Singh, the Congress candidate from Khandwa Lok Sabha constituency. She also stayed in his house for three days. During Rahul Gandhi’s Bharat Jodo Yatra, the Thakur family will present him a photo and album preserving the memories of three generations.

Indira Gandhi campaigned in an open jeep for three days.

Indira Gandhi campaigned for three days in an open jeep in Burhanpur, Nepanagar and Khandwa areas in support of Shiv Kumar Singh. Had also addressed many election meetings. Millions of people used to gather to see and hear him. The result of this was that BJP’s then strong leader Kushabhau Thackeray was defeated. Thakur Surendra Singh alias Shera Bhaiya, MLA of Burhanpur and younger brother of late Thakur Shivkumar Singh, says that we have three generations of relations with the Gandhi family, an album and photo preserving those relations when Rahul Gandhi’s Bharat Jodo Yatra reaches Burhanpur. Will be presented to them.

Burhanpur’s MLA Thakur Surendra Singh alias Shera Bhaiya, while sharing his experience with TV9 Bharatvarsh, said that in the year 2000, Sonia Gandhi had also come to unveil the statue of late Thakur Shivkumar Singh at the sugar factory located in village Jhiri of Burhanpur. Here he also visited the sugar factory. After this she left. Thakur Surendra Singh alias Shera tells that on 26 April 1956, India’s first Prime Minister Pandit Jawaharlal Nehru had also arrived at Nepanagar in Burhanpur to inaugurate the paper factory Nepa Mill, which is still giving employment to thousands of people.

Preparations have been completed in Burhanpur. Many cultural colors of Burhanpur will be seen during the journey. Here drums and drums will welcome Rahul Gandhi’s Bharat Jodo Yatra and there will be folk dance in Banjara costumes. Along with this, Rahul Gandhi’s Bharat Jodo Yatra will be welcomed by performing traditional dance in Korru costumes. The yatra will cover a distance of 17 kilometers from village Bodarli to Burhanpur. During this, a crowd of 70 containers and lakhs will be seen in Bharat Jodo Yatra. There will be food and rest at SET JBS School located on Indore Ichhapur State Highway. After this, the journey will start running again at 4 pm. After reaching Burhanpur, Transport Nagar Rahul Gandhi will address the public meeting.

Exit Poll 2022: BJP towards Saurashtra victory on the shoulders of Patidars who taught them a lesson

CM Bhupesh participated in the Sonkar Samaj Sammelan, where- development will happen only by working hard in the field of education

Maha Exit Poll: Kejriwal surprised by the storm of BJP in Gujarat – will the custom change in Himachal?