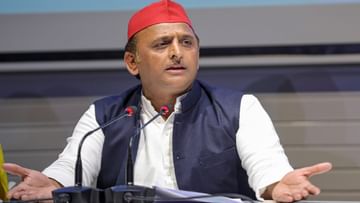 The Akhil Bharat Hindu Mahasabha has filed an application at the Hazratganj police station in the capital demanding registration of a case against Swami Prasad Maurya for making controversial statements on Ramcharitmanas.

on Ramcharitmanas Swami Prasad Maurya There has been a political uproar over the controversial remarks of (Swami Prasad Maurya). It is reported that Samajwadi Party (SP) chief Akhilesh Yadav is unhappy with Swami Prasad’s remarks. Apart from Akhilesh, many MLAs of the party are also keeping themselves away from Maurya’s statement. According to sources, a press conference can also be held on behalf of the Samajwadi Party.

According to news agency ANI, several SP MLAs have discussed this with Akhilesh Yadav over the phone. There is a lot of dissatisfaction in the party regarding Maurya’s controversial statement. Ayodhya BJP leader Rajneesh Singh has sent a copy of Shri Ramcharit Manas to SP President Akhilesh Yadav by post, while another BJP leader has demanded registration of a case against Maurya. In a statement, Singh said, “I have sent a copy of Shri Ramcharitmanas to Akhilesh Yadav with a request to read it.” If he is not able to understand it, then I can send saints from Ayodhya who can explain to him about Manas.

Uttar Pradesh BJP leader Kumar Ashok Pandey, in a letter to Chief Minister Yogi Adityanath, has demanded that Section 295A of the Indian Penal Code (deliberate and malicious act intended to hurt the religious feelings of any class) be invoked against Swami Prasad Maurya. A case should be registered under this. Pandey said in the letter, “Strict action should be taken against him (Swami Prasad Maurya).

Hindu Mahasabha filed an application in the police station

Akhil Bharat Hindu Mahasabha state president Rishi Kumar Trivedi has filed an application at the Hazratganj police station in the capital, demanding registration of a case against Swami Prasad Maurya for making controversial statements on Ramcharitmanas. Meanwhile, Uttar Pradesh Congress spokesperson Ashok Singh Said, ‘No one has the right to hurt the religious sentiments of any person. People of different religions live in India, and everyone should be respected.

Significantly, SP’s Legislative Council member Swami Prasad Maurya said on Sunday, “If any section of the society has been insulted on the basis of caste, caste and class in some lines of Ramcharitmanas, then it is definitely not religion.” Maurya had said, “Some lines of Ramcharit Manas mention the names of castes like Teli and ‘Kumhar’ which hurt the sentiments of lakhs of people of these castes.” Maurya demanded that such parts of the book, which insult someone on the basis of one’s caste or any such mark, should be banned.

Swami Prasad Maurya, who was a cabinet minister in the previous BJP government of the state, left the BJP and joined the SP before the state assembly elections held last year. Maurya contested from Fazilnagar seat in Kushinagar district, but lost. However, later the SP made him a member of the Legislative Council. Meanwhile, some Hindu organizations have opposed Maurya’s statement in Agra in the state. (with language input)

Weather News: After cold winds in these states including Delhi, rain will increase cold, mercury will drop up to three degrees