MMS viral of 60 girls, video made while bathing, 8 attempted suicide 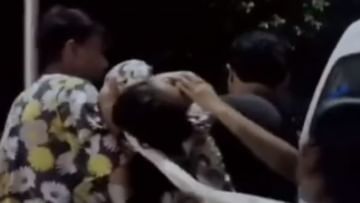 By making a video of 60 girl students taking a bath in Chandigarh University, her own fellow student made it viral on the internet. There has been a lot of uproar in the university after this incident came to light.

Punjab One in Mohali University Late in the night, the situation became uncontrollable when a girl student made a video of other girl students while bathing. Internet But went viral. After these videos surfaced, 8 girl students of the hostel have also tried to commit suicide. The students created this ruckus at the gate number 2 of the university. Many students gathered here and they raised slogans fiercely. Later after the arrival of the police and after getting assurance of action, the students calmed down. According to sources, the condition of one of the girl students who committed suicide is critical.

There was a ruckus at Chandigarh University in Mohali late on Saturday night. Many students reached here at around 2.30 pm and demonstrated. The students have alleged that a girl student living in the girls’ hostel recorded a video of 60 girl students while taking a bath. The student used to send these videos to a boy. That boy used to upload those videos on the internet. Very serious allegations have been made in the case. The police have been informed about this.

MMS of 60 girl students was made and uploaded on the internet. When the girls saw those videos, they did not understand how it happened. Due to this incident, 8 girl students living in the hostel have tried to commit suicide. According to the information received from the sources, the condition of one of these students is said to be serious. Rest of the girl students have been admitted to the hospital.


Police had to be called, lathi charge happened

Previous ArticlePetrol-Diesel Price Today: Today’s petrol and diesel prices were released, know where the price reached in your city
Next Article If this is the budget then iPhone 12 and iPhone 13 will be in pocket, bumper discount in Flipkart Big Billion Days sale