Landslide is not the reason for cracks in buildings, experts made big disclosure on Joshimath crisis 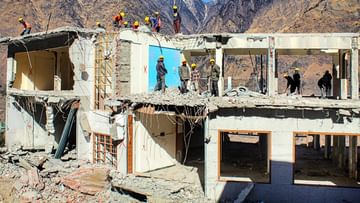 On the other hand, Kalachand Sen, director of the Wadia Institute of Himalayan Geology, also agreed with Petli and said that landslides occur in sloping areas. This includes both vertical and horizontal movement.

It is wrong to call the Joshimath crisis a landslide.

The crisis still persists in Joshimath of Uttarakhand. Buildings are cracking and all kinds of claims are being made about it. At the same time, a report by British scientist Dave Petley has come out on this crisis. In this he has told that cracks in buildings in joshimath What is the real reason behind? According to the report, Petli believes that the cracks in the buildings of Joshimath did not come due to land subsidence, but the main reason behind it is accelerated landslides.

According to media reports, Dave Petley, Vice-Chancellor of Hull University in Britain, shared information related to this in his American Geophysical Union blog on 23 January. In this he wrote that there is no doubt in Joshimath that it is a landslide and the city is going down. He wrote that it is clear from Google Earth imagery that this city is built on an ancient landslide.

It is wrong to call the Joshimath crisis a landslide.

On the other hand, Kalachand Sen, director of the Wadia Institute of Himalayan Geology, also agreed with Petli and said that landslides occur in sloping areas. This includes both vertical and horizontal movement. Even before this, Kalachand had said on January 14 that it is wrong to call the Joshimath crisis a landslide.

Three reasons for the Joshimath crisis

He said that we are doing geophysical studies to see how subsurface factors contributed to the cracks on the surface. Sen said that landslides can happen due to three to four reasons. In this, the first reason is rain, the second is tectonic movement and the third reason is human activities. All three are likely here. Kalachand Sen said that some areas are less affected, while some are severely affected. As soon as we have the data, we will be able to tell how big an area can be shifted. On the other hand, according to geologists SP Sati and Naveen Juyal, there have been signs of both sinking and sliding of Joshimath.

Crisis due to the construction of Helang bypass

According to media reports, Mallika Bhanot, a member of Ganga Awahan, also raised questions on the construction of Helang bypass. He said that this crisis is clearly linked to the construction of the Helang bypass under the Char Dham project. If there was knowledge that the area was so vulnerable to landslides, how was the government developing it into a high tourism zone with mega projects?

Joshimath developed on the debris of landslide

Apart from this, Earth Sciences Secretary M Rajeevan said that Joshimath was developed on the debris of landslides that happened several hundred years ago. He said that I am not a geologist, but I understand from earth scientists that this area is slowly cracking due to many reasons. A large area can be affected here. He said that the government should start monitoring to prevent such incidents in future.