If government is formed in Gujarat, old pension scheme will be implemented till January 31, AAP’s guarantee to government employees 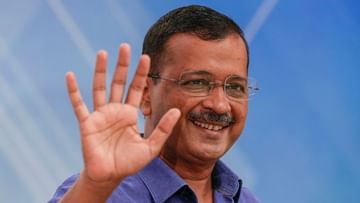 Addressing the roadshow, Arvind Kejriwal said that I have been coming to Gujarat for the last few months and I am getting a lot of love from the people of Gujarat.

CM Kejriwal said that it is written in the Gita that whenever the pot of sin gets filled, the one above sweeps it. In Gujarat, the above has started running his broom. Something divine is happening in Gujarat, if it was not so then whole Gujarat would not have gathered so soon. This time a big change is going to happen in Gujarat. Chief Minister of Delhi Arvind Kejriwal sought votes by holding a road show in support of the party’s candidates in Bhavnagar, Gujarat today. A large number of supporters gathered in the road show. People carrying Aam Aadmi Party flags were marching ahead with his convoy swaying to the tune of the song “Ek Mauka Kejriwal Ko”. The crowd of supporters kept on increasing throughout the road show. By registering their presence in large numbers in the road show, the people of Gujarat gave a clear indication that this time the Aam Aadmi Party is going to form the government in Gujarat.

Electricity bill will come to zero in Gujarat – Kejriwal

Addressing the roadshow, Arvind Kejriwal said that I have been coming to Gujarat for the last few months and I am getting a lot of love from the people of Gujarat. I cannot repay this favor for the rest of my life. In Gujarat someone calls me brother, while someone calls me son. Now I have become a part of every family in Gujarat. Today I want to assure all of you that if Aam Aadmi Party government is formed then I will be a part of your family and take full responsibility of your family. Inflation has become very high in Gujarat. First of all, we will remove inflation, especially women are troubled by inflation. The man earns and keeps the money in his hand and by the 20th-22nd of the month the money runs out. After that the poor woman does not understand how to run the house.

AAP’s national convenor Arvind Kejriwal said that every month one will be deposited in the account of all women above 18 years of age. If there are two women in a house, both will get one thousand rupees each. BJP people abuse me a lot. BJP people say that Kejriwal will loot all the money. Kejriwal is only giving money to the public, Kejriwal is not taking the money in Swiss bank, Kejriwal is not building Kothia. Kejriwal is not buying property, there is a lot of unemployment in Gujarat. Most of our youth study the whole night and when they go to give the paper, the paper gets leaked. Paper does not explode in Gujarat, these people sell paper, these people do dishonesty. Kejriwal said that I am the Chief Minister of Delhi for 7 years.

Not a single paper exploded in Delhi. Bhagwant Maan Sahib is the Chief Minister of Punjab for 7 months, in Punjab only in the month of October police recruitment papers were held and not even a single paper was blown. Because we are honest people. We do not earn money by selling papers like these people. Don’t litter like them. I guarantee all the youth that all the government recruitments are there, I will complete all the recruitments within one year and not a single paper will be leaked. Apart from this, all the papers that have been leaked in the last 7 years will be investigated and those who have sold the papers will be sent to jail for 10-10 years. I will wait for employment for all the unemployed youth. I have provided employment to 12 lakh youths in Delhi. Until the youth do not get employment, every unemployed youth will be given unemployment allowance of three thousand rupees.

Arvind Kejriwal said that these people threaten businessmen a lot and send inspectors to raid them. I want to assure all the traders that if our government is formed, we will end the Red Raj. You will not need to go to the government office for any work, all the work will be done online. The way these people intimidate and threaten, similarly no businessman will be intimidated or threatened. Will give respect to all traders and all people will be able to work without fear. Two months ago government employees had come on the road. Thousands of government employees surrounded the secretariat in Gandhinagar. Government employees want old pension scheme.

I want to say that the old pension scheme will be implemented for government employees by 31st January. We have implemented the old pension scheme in Punjab. Notification has come on November 18 to implement the old pension scheme in Punjab. I request you all to cooperate in forming the Aam Aadmi Party government in Gujarat. You have given them 27 years. 27 years is not less. I have come to ask you only 5 years. If I don’t work, then next time push me out. The people of Delhi had given me 5 years. He fell in love with me so much that the people of Delhi gave only 3 seats to the BJP in the elections. Zero seats were given to the Congress and all the remaining seats were given to the Aam Aadmi Party.

Will fulfill all the promises in the next five years – Kejriwal

Give me one chance and see, I will fulfill all the promises I have made with you within the next five years. The wind of change is blowing in Gujarat. Whole Gujarat has stood up. This time some miracle is going to happen. It is written in the Gita that whenever the pot of sin gets filled, the one above sweeps it. In Gujarat, the above has started running his broom.

Arvind Kejriwal Bhavnagar Gujarat Gujarat Assembly Election
Previous ArticleCOVID-19: An atmosphere of panic due to Corona rules in China, 10 people died due to strict restrictions
Next Article 200 shops gutted, fire not extinguished even after 40 hours, loss of 500 crores so far in Bhagirath Palace Market