Heat record broken in winter, January 23 was the hottest day in four years; the weather will turn again 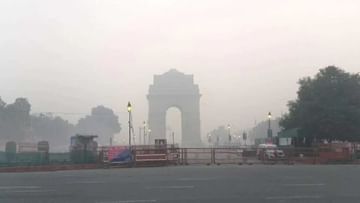 Now the effect of cold winds has started reducing in the capital Delhi. Monday was a day of relief for the people of Delhi, who were facing severe cold in the midst of cold wave.

On Monday, there was a feeling of warmth in the midst of winter in Delhi.

Now the effect of cold winds has started reducing in the capital Delhi. last days cold wave On Monday, the day was full of relief for the people of Delhi who were facing the bitter cold. India Meteorological Department (IMD) If we believe that in the last four, 23rd January i.e. Monday is the day for Delhi. hottest day recorded in. With a combination of clear sky and warm easterly winds, Delhi recorded a maximum temperature of 25.9 degrees Celsius on Monday, 1.9 notches above Sunday’s maximum and five notches above normal.

The last time Delhi recorded the hottest day (January 21) of 2019 was 28.7 degree Celsius. On the other hand, talking about the weather of Delhi, according to the India Meteorological Department (IMD), the sky has been predicted to be cloudy and light rain in the morning and evening, while the maximum temperature of the capital will see a drop again from Tuesday. While there may be drizzle in different parts on Wednesday and Thursday.

By making you feel the heat, the weather will again take a turn

India Meteorological Department (IMD) meteorologist Kuldeep Srivastava said, Delhi has started showing the effect of active Western Disturbance affecting North India, warm easterly winds are blowing since morning. The temperature has increased to the maximum with the help of warm easterly winds. The national capital recorded a maximum temperature of 25.9 degrees Celsius on Monday, five notches above the season’s average, while the air quality was recorded in the very poor category.

According to the India Meteorological Department (IMD), Delhi recorded a minimum temperature of 7.6 degrees Celsius on Monday morning, which is normal for the current period of the year.

Delhi’s air may deteriorate on Tuesday

Delhi News Delhi Weather Delhi weather update IMD january
Previous ArticleFed up with the bank? File a complaint like this sitting at home; Know the rule of RBI
Next Article Tecno Spark Go 2023: Dhansu phone has arrived in less than 7 thousand, features are above super