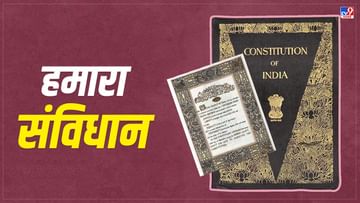 There are many such things in our constitution which make us different from the constitution of other countries.

This time 74th in the country Republic day is being celebrated. This day is important for us because on this day the country adopted the constitution. In fact, since independence in 1947 in the country constitution making The preparations had started. constituent Assembly was formed and it was implemented on 26 January 1950.

It is said that in the process of making the Indian Constitution, the Constituent Assembly made a deep study of the constitutions of about 60 countries. On Republic Day, we are going to tell you 5 such things about the constitution which separate us from the constitution of any country in the world.

Talking about the constitution, what separates us from the constitutions of countries around the world is our governance system. Actually our country is based on the federal government system. This is the system in which the powers of the center and the state are divided separately. Under this system, no one can change their powers in any way they want. The system of government in France is unitary and Britain is still monarchical.

2- Changes in the constitution

The specialty of the Constitution of India is that it is neither too rigid nor too soft, it is being changed easily, but its fundamental structure, that is, the supremacy of the constitution, parliamentary democracy and independent judiciary, cannot be changed. Although changes can be made in its different parts, but the condition is that the fundamental structure is not affected, while there are many countries where the constitution cannot be changed, there are many countries in which the entire constitution can be changed.

Seen as a judiciary, which is a unified judiciary in India, while in America there are separate courts for federal and state laws. Judiciary in France has not got powers like America or India. The judiciary in Britain is generally completely free from interference by the executive and the legislature.

The basic duties of the citizens are discussed in the Constitution of India, special provisions have also been made for some states, whereas in Britain even today the power runs on the basis of the Crown.