This problem happening in the feet is a symptom of diabetes, this is how to avoid it 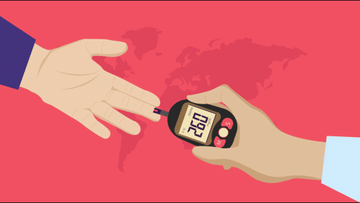 Diabetes symptoms: If there is swelling in the feet and ankles, then these can be the initial symptoms of diabetes. It should not be ignored.

Diabetes diseases: around the world every year Diabetes Cases of disease are increasing. Among non-communicable diseases, diabetes is the fastest growing disease after cancer and heart disease. It has 77 million patients in India. It is a matter of concern that now people are falling prey to this disease at an early age. Due to wrong eating habits, poor lifestyle, this disease is spreading rapidly.

One of the major reasons for the rise of diabetes is that people are not aware of its symptoms. The effect of diabetes on different parts of the body begins to be seen much earlier. But people do not pay attention to them and when the disease becomes dangerous then they go to the doctors.

Experts say that problems in some parts of the body are also a sign of diabetes. By identifying them on time, this disease can be kept under control. Information about this disease can be easily obtained only from the feet. Apart from this, diabetes can also be identified by eye and kidney.

These symptoms are seen in the feet

Senior Physician and Endocrinologist Dr. Spinil Kumar explains that if there is swelling and sensation in the feet, then these can be early symptoms of diabetes. It should not be ignored. Apart from the feet, this disease can also be identified by the eyes. Diabetes can lead to diabetic retinopathy. Due to which there is a problem like blurred vision, dry eye.

This disease damages many parts of the body. This also affects the immune system. It is a matter of concern that these symptoms are visible in many people for a long time, but they do not know that it can also be a problem of diabetes.

This problem occurs in kidney

If you are passing urine frequently and the level of protein in the kidney is not normal, then these are also symptoms of diabetes. Diabetes can also damage the kidney. Diabetes can cause kidney problems. In such a situation, it is very important to control the blood sugar level in the body.

keep these things in mind

Keep the weight under control. exercise daily for

Cause of Diabetes diabetes Diabetes and Coronavirus Diabetes care
Previous ArticleWoman gang-raped in hospital for husband’s treatment, said – will kill if told to anyone
Next Article IND vs NZ: Shubman Gill created history by beating Babar Azam, people congratulated on social media

Is this disease the reason for premature aging? Know this strange syndrome

These symptoms in the body are signs of hyperthyroidism, this is how to avoid

Take Insulin injection in this way, there will be less pain and better effect

Amla Juice Benefits: Amla juice is a panacea for health, prepare it at home with these easy tips

Singer KK died due to Myocardial Infarction, know how to keep yourself safe from this disease

Pancreatic cancer can start with these symptoms in the body, this is how to protect