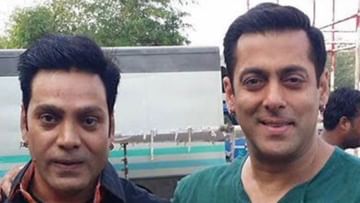 Celebrities including actors Anupam Kher and Ronit Roy, actress Sangeeta Bijlani among others have expressed grief over the death of Sagar Pandey, reacting to Salman Khan’s post.

Bollywood actor Salman Khan has penned an emotional post paying tribute to his body double Sagar Pandey. According to media reports, Sagar Pandey died of a heart attack on Friday at a gym in Mumbai. He had worked as Salman Khan’s body double in many other films including Bajrangi Bhaijaan, Tubelight and Dabangg.

had died of a heart attack

According to reports, Sagar Pandey was taken to a nearby hospital after suffering a heart attack, where doctors declared him brought dead. Salman Khan remembered him by sharing a picture posed with Sagar Pandey on the sets of 2015 film Bajrangi Bhaijaan. He wrote along with the picture, thanking you from the bottom of my heart for being with me. May the above give peace to your soul, Sagar Bhai. Thanks Sagar Pandey.

Many other stars also expressed grief

Celebrities including actors Anupam Kher and Ronit Roy, actress Sangeeta Bijlani among others have expressed grief over the death of Sagar Pandey, reacting to Salman Khan’s post.

The news of his death came to the fore the very last day. Actually, while working out in the gym, Sagar had chest pain, after which he fell on the ground. Seeing this condition of Sagar, he was admitted to the nearby Hindu Hriday Samrat Balasaheb Thackeray Trauma Care Municipal Hospital, where the doctors declared him brought dead.


Sagar Pandey was a big fan of Salman Khan

It is said that Sagar Pandey was a big fan of Salman Khan. At the same time, he was also very close to her. Sagar Pandey’s age is being told between 40-45. Body double B’s work equally hard for Bollywood stars who work hard for their films. There are very few actors who do the action sequences of the film themselves. To a large extent, actors use body doubles. His face is not visible to the people but his hard work is appreciated. He works for films like a ghost actor.

Actor Salman Khan Lookalike of Salman Khan Salman Khan
Previous ArticlePak vs Eng: Babar Azam broke this record of Virat Kohli, know what is the record?
Next Article Give this speech on the occasion of Gandhi Jayanti, the applause will keep ringing, will leave an impression